Joseph Quinn is currently a Dynamic Parish Consultant. Dynamic Parish  helps facilitate the transformation of individual parishioners and parishes to re-energize the Catholic Church in America by developing world-class resources that inspire people to rediscover the genius of Catholicism.

“What is your will for my life Lord?”  Joe Quinn asked that and similar questions for years when life did not seem to make sense to him. He has worked in sales, consulting, counseling, teaching and even pulled his first bartender shift in Ireland.

Eventually, he heard a call to “Come and work for Me … in my garden.” So, Joe set out to find a job working for the Lord. He is now evangelizing and working with several parishes in New Orleans and Detroit to make them more fruitful.  Joe will come share his journey and what he learned as the answer to that question at our retreat in September. 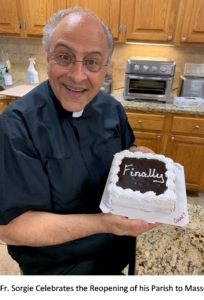 Fr. Anthony Domenic Sorgie was born into a family of Italian Immigrants and was raised in the Pelham Bay Area of the North East Bronx.  Baptized at the Italian National Parish Shrine of St. Theresa of the Child Jesus, he attended St. Theresa Grammar School with the Sparkhill Dominican Nuns and Cardinal Hayes High School.  The wonderful Diocesan Priests that served at St. Theresa influenced his decision to be a priest. His father, Nunzio, passed away in 2003 at 89 and his mother Maria Lisette Provenzano passed away in 2010 at 94. His brother Charlie and sister-in-law Ursula retired to Florida.

Fr. Sorgie entered Cathedral College of the Immaculate Conception in Douglaston Queens and then St. Joseph’s Seminary in Dunwoodie, Yonkers NY.  He was ordained a priest on November 6, 1982.  He served at St. Boniface Church in Wesley Hills New York while pursuing a Doctorate in Music and Education at Columbia University.  In 1986, he was placed on the Faculty of St. Joseph’s Seminary where he taught until 2000.  In 1987 he spent a semester at the Accademia Chigiana in Siena and subsequently at the Pontificio Musica Sacra in Roma. During his time at Dunwoodie Fr. Sorgie taught Music, Liturgy, and Homiletics and was in administration as Dean of Admissions and Academics, and finally as Vice Rector, when he was transferred in 2000.

During his 15 years at Dunwoodie, he gave workshops and seminars in Parishes all over the Archdiocese as well as in Italy.  In the year 2000 he was made Pastor of St. Benedict’s in the Bronx before being transferred to St. James in Carmel, New York.  He had been Pastor of St. James since 2004. With two Churches and an Elementary School on two campuses, this vibrant parish in Putnam County grew and occupied his life until 2015.

Knowing that his next move as a pastor could be his last, he carefully spoke to Archbishop Timothy Cardinal Dolan of New York about shepherding the two communities of Assumption Parish in Tuckahoe (1911) and Immaculate Conception Parish (1853) which would be united in 2015.  Cardinal Dolan appointed him Pastor of the New Parish of Immaculate Conception & Assumption of Our Lady July 2015 with two Churches, Holy Mount Cemetery, ICS Regional Catholic Elementary Schools with 16 acres on three Campuses and 11 buildings.  The parish is busy, vibrant and a very active Catholic Community.

New to Using the Zoom Platform?

Click on the link below to help using Zoom for First time Users: : https://www.youtube.com/watch?v=kh50kVaIdAY

Born in New York City in 1930, Msgr. Dermot Brennan attended Corpus Christi Parochial School, Cathedral College and St. Joseph’s Seminary, Dunwoodie and was ordained in 1956. His ministry has included teaching for 12 years in archdiocesan high schools, 12 years as an assistant pastor and 25 years as a pastor, 5 at Our Lady of Victory Parish in Mt. Vernon, NY and 20 at St. Patrick’s Parish in Yorktown Heights, NY. He holds a Master’s Degree in Music Education from Teachers College, Columbia University, conducted the music for the Papal Mass at Yankee Stadium in 1979, and has authored a book on using visuals in children’s homilies and performs Magic as a hobby. Furthermore, as the result of many years of active ministry, he authored in 2009, Your Parish Priest and Man of Mystery offering answers to the mystery on what do priests do from Monday to Saturday each week on two levels: (1) the sacramental, ritual, teaching ministries and prayer life and (2) counseling, consoling, preaching, visiting the sick and homebound, caring for the poor and the elderly, challenging the youth of the parish, evangelizing the unchurched, overseeing the parish and school maintenance and upkeep, among other pastoral things; concluding that the life of the parish priest is very fulfilling indeed, thanks to the grace of God, the presence of Christ, and the inspirations of the Holy Spirit.

He is currently retired from parish administration but is still very active in priestly ministry.

Fr. Thomas Franks, OFM Cap., is the current Manhattan College chaplain.  As chaplain, he provides direction, guidance and pastoral care for the liturgical, sacramental and spiritual life of the College campus community. He had been the pastor of the Roman Catholic Church of Holy Cross and Saint John the Baptist in midtown Manhattan. Prior to the merger of the two churches, he was pastor of Saint John the Baptist from 2011-15 and was parochial vicar from 2008-11. Furthermore, Fr. Franks was a missionary of mercy during the Jubilee Year of Mercy in 2016, with faculties conferred by Pope Francis. Since 2012, he has been the deputy chief chaplain of the Metropolitan Transit Authority. He also has served as a rector at the Shrine of Saint Pio of Pietrelcina and has been a pilgrimage chaplain on trips to Italy, Germany and the Holy Land.